Whether you want to meet Mickey Mouse at Disney World, Dora at Universal Orlando or Elmo at SeaWorld, you’ll need the same basic information to make the most of your meeting. Review these character greeting tips, and you’ll be ready when you spot your favorite character strolling by or signing autographs.

Here is a great article about where to meet the characters at Disney World.

Some characters can be scary: a 2 foot tall Elmo seen on television is cute and cuddly – in person, Elmo tops out at about 7 feet tall! Don’t be surprised if some characters, particularly those in full costumes complete with masks, are scary to young children. Approach a face character like a princess first—they will be less scary, and you can see how your child does.

Some characters don’t speak: Most characters that wear full costumes complete with head won’t speak. From Winnie the Pooh to Donald Duck, expect to see plenty of pantomime when you interact with characters in the theme parks.

Wait your turn: Most characters appear in designated meeting spots—and there will be other people waiting to snap a photo. Figure on at least a minute or two per party in line, and decide if it is worth committing the time before you get in line. Not interested in waiting? You can find character greeting locations with Fastpass tickets at the Magic Kingdom. 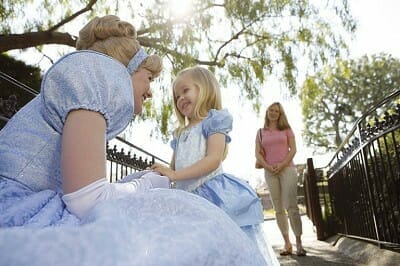 Choose a character meal: If you want a little more time with your favorite characters, reserve a table for a character meal. You can find Mickey and pals at Chef Mickeys at the Contemporary Resprt, or the princesses at Cinderella’s Royal Table, Storybook Dining in Norway at Epcot and at 1900 Park Fare at the Grand Floridian.