Let’s start off with the similarities:

Both are resorts with multiple theme parks

Walt Disney World has Magic Kingdom, Epcot, Disney’s Hollywood Studios, and Disney’s Animal Kingdom. Universal Orlando Resort has Universal Studios, Islands of Adventure, Volcano Bay, and Epic Universe (coming soon!) This can get a little confusing because both resorts have a studio-themed park. At both Disney World and Universal Orlando, you can buy tickets for each theme park or a Park Hopper. With a Park Hopper pass at Disney World, you can hop from one park to another. At Universal, it is a Park to Park ticket.

Each has its own outdoor shopping, dining, and entertainment district

Walt Disney World has Disney Springs while Universal has CityWalk. Each of these districts has amazing restaurants, shops, clubs, and movie theater complexes. CityWalk has a miniature golf course within its district, bars, and a new Escape Room. Disney’s mini-golf courses are located at the Swan and Dolphin Resort and Blizzard Beach Waterpark. However, Disney Springs does have bowling, tethered balloon rides, boat rentals, and a few other things to do.

Disney World guests who stay at Disney Resorts receive perks such as discounted magic bands and first access to Genie+  which is the paid option for shorter lines. Advance dining reservations and extra magic hours are also a perk for Disney Resort guests.

Guests staying at Universal Orlando Resort premiere hotels get to take advantage of shorter lines by getting free Express Passes. They are also allowed Early Park Admission an hour before day guests in the morning.

When it comes to having a budget for your Walt Disney World tickets and Universal Studios tickets, they both have similar incentives. The reality is that the more tickets you buy, the less it will cost you in each park. When you buy a 1 Day 1 Park ticket, the price might elevate. However, prices will vary on the season and the day you choose to go to the parks.

Both parks offer unique experiences, however, they both offer incredible journeys that the whole family can enjoy. From thrilling roller coasters to toddler rides and playgrounds, both parks have something for everyone for your Orlando vacation.

Disney can skew their rides more towards smaller children and Universal to older children. Through the years they have begun to appeal to all ages, but in general, Disney has more for little ones and Universal for tweens and up.

And now the differences:

The Wizarding World of Harry Potter is ONLY at Universal Studios

Many tourists assume that Harry Potter can be found at Disney, however, Diagon Alley is found at Universal Studios while Hogsmeade is found at Islands of Adventure. You can enjoy each area, but you will need a Park to Park ticket if you want to go ride the Hogwarts Express from Diagon Alley from one park to Hogsmeade in the other park.

SpongeBob, the Minions, Scooby-Doo, The Simpsons, the Cat in the Hat, the Madagascar gang, SpiderMan, and other Marvel heroes can be found at Universal Orlando Resort. Characters from the worlds of Pixar, Star Wars, Disney, and Disney princesses can be found inside the Disney parks.

“But doesn’t Disney own Marvel and The Simpsons?!” Yes, however, Universal had a long-term agreement in place before Disney bought them, so Spidey and the other specific Marvel superheroes can only be found at Islands of Adventure. The Simpsons are found at Universal Studios.

Since the two theme parks are competitors there is no shared transportation between the Universal parks and the Disney World parks. You can, however, take an independent shuttle to Universal if you’re staying at a Disney-owned hotel, and you can get to Disney from a Universal hotel in the same way. An Uber or Lyft may also do the trick.

When it comes to the size of these parks, generally we wouldn’t think it is that important. However, theme park size is essential in knowing what type of vacation you will take. Universal Orlando Resort consists of 3 parks: Universal Studios, Island of Adventure, and Volcano Bay (a waterpark) and resides on 840 acres. On the other hand, Disney World is almost twice the size of Manhattan, with 25,000 acres! Animal Kingdom is the largest while Magic Kingdom is the smallest in size.

Disney World vacations tend to bring up childhood memories and revolve around Mickey Mouse and Disney Princesses along with a passing of the baton of a cherished experience to the next generation. That same feeling of nostalgia may be strong while in Universal Studios, by experiencing the recreated epic movies of Harry Potter. 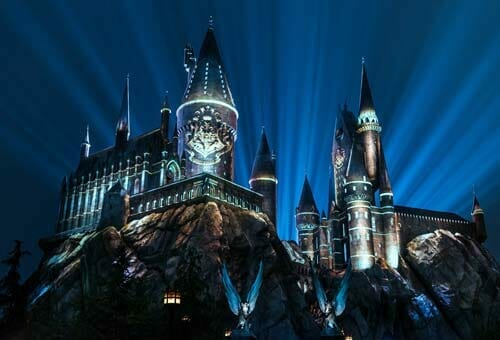 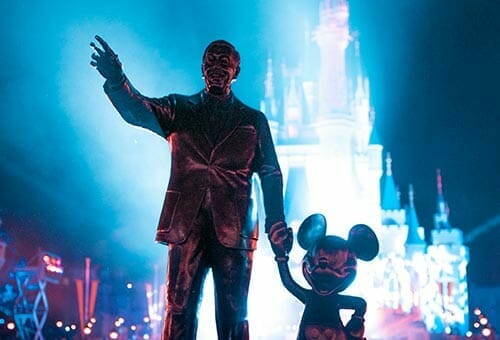 A Magical Experience is Just Beginning