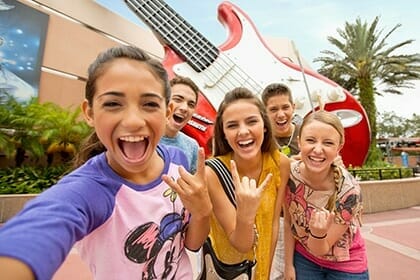 Your teenagers may be interested in shows, but what they probably really care about is the rides. Here are the rides they shouldn’t miss, arranged in order of importance.

The thrill rides are the only attractions to generate any real lines (with the exception of Star Tours, which never has much of a wait). Rock ‘n Roller Coaster tends to have slightly longer wait times than Tower of Terror, so if you’re visiting early and before the crowds arrive, ride Rock ‘n Roller Coaster first and then Tower of Terror. It may also make sense to FASTPASS these two attractions, one after the other. On very busy days, however, the Return Time for the first attraction is so many hours later in the day that you won’t be able to FASTPASS the second one, and will have to stand in the standby line.

At Disney-HOLLYWOOD Studios, the live shows are so prolific, they outnumber the rides. Here is my list of shows at this park, ranked in order of importance for preteens:

There are some good choices at Disney-Hollywood Studios for every kind of dining need, but if you are looking for something your teenagers will love then there is one place I would recommend over all others…Mama’s Melrose. The hit at this restaurant is the oven baked pizzas, and what teenager does not like pizza. Mama’s Melrose sits right next to the Muppets 3-D show, and it is a great place for lunch.

If you are visiting Disney World with pre-teens or teenagers you might want to check out our Disney World vacation homes, which all come with a private swimming pool. These homes provide you more living space, multiple TV’s, multiple bathrooms to get dressed, and fully equipped kitchens. They are perfect for families with older children.