The fall season means cooler weather leading into winter and a variety of seasonal events at Walt Disney World. Some are tied to the holidays, while others are Disney exclusives. Here’s what to expect when you visit the Disney theme parks between September and December:

Mickey’s Not So Scary Halloween Party

Mickey’s Not So Scary Halloween Party at the Magic Kingdom is an annual favorite for both children and adults. Kids of all ages get to trick-or-treat at stations all around the park, taking in a heavy haul of goodies. It’s also one of the rare occasions on which adults get to wear costumes in a Disney park, and many take full advantage of that fact. It’s sometime hard to tell which characters are official and which are guests with a talent for creating authentic costumes. Many of the Magic Kingdom rides are open, and the party also features special character greets, shows, and the Boo to You parade. The party runs on select nights through October 31, 2016, and requires a special ticket that’s separate from regular theme park admission.

Even though the party starts at 7 p.m., the ticket gets you in at 4 p.m., so you don’t have to use a day ticket if you hang out at your hotel or vacation home, go shopping at Disney Springs, or explore Orlando until admission time. Get to the park early and enjoy the rides before the party officially starts. That gives you more time to devote to trick-or-treating and waiting in line for photos with the Disney characters in their costumes and special guests like Jack Skellington and Sally. You’ll also want to catch the parade, dance parties, and “Hocus Pocus” stage show, so check the show guide as soon as you arrive and make a plan for your evening. If your children are young, get them to nap before the party so they can make it through to closing time.

The Epcot International Food and Wine Festival is a popular fall event that’s geared toward the “big kids,” although it’s family friendly. It runs from September 14 to November 14, 2016, and gourmet food, wine, and other adult beverages abound, with kiosks around World Showcase and spilling over into Future World. The festival also features special dinners, seminars, tasting events, themed merchandise, and the Eat to the Beat concert series with artists like Wang Chung, Living Colour, and Soul Asylum. The concerts are included with park admission and they feature open seating, so get in line early to get a good seat for your favorite bands.

Pick up a free festival passport when you arrive at Epcot and let the kids assist in getting it stamped at each kiosk as you navigate the culinary landscape. That will keep them involved and help maintain their interest. It doesn’t hurt to promise them a ride on the new Frozen Ever After ride when you get to the Norway Pavilion, although you’ll want to book a FastPass+ time in advance to avoid at hour-plus wait in line. 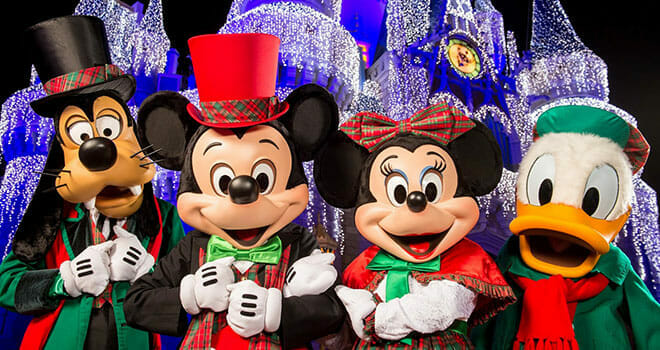 Like the Halloween party, Mickey’s Very Merry Christmas Party is an after-hours event at the Magic Kingdom that offers special shows, fireworks, and a parade featuring favorite Disney characters and Santa Claus himself. Most of the rides are open during the party, including the Jingle Cruise, a special holiday-themed version of the famous Jungle Cruise, complete with seasonal wisecracks from the skippers.

During the party, guests can indulge in all the free cookies, cider, and hot cocoa they can eat and drink at various stops around the park. Even though Florida’s not known for chilly winters, Disney magic makes it snow on Main Street every night to add to the festive holiday atmosphere. While the party starts at 7 p.m., your tickets get you in at 4 p.m., letting you enjoy the rides and regular shows before the special party activities begin. Make the most of your night by arriving early and staying ‘til the party ends.

Holidays Around the World

Epcot lets guests take a quick trip around the world at any time of year, but Christmas is a special time because it offers a glimpse into global holiday celebrations. Costumed Cast Members at each of the pavilions share information on traditions in their countries through storytelling and song. Epcot is also home to the Candlelight Processional, a retelling of the nativity story with a different celebrity narrator each night, accompanied by a live band and choir. The show is free, but its popularity means long lines, so you may want to take advantage of the lunch or dinner package. You get a meal at a select Epcot restaurant and access to a reserved seating area rather than waiting in line and hoping you make it into the theater before it fills.

Disney is almost finished with a massive renovation of the former Downtown Disney area, now known as Disney Springs. It’s packed with stores, restaurants, and entertainment, and things get kicked up a notch during the holidays. Enjoy Christmas music as you shop for gifts, and take some time out to enjoy the carolers, stilt walkers, and other performers. You’ll see shows centered around Christmas, Hanukkah, and Kwanzaa, and the kids can meet Santa and tell him if they were naughty or nice. Parking is free at Disney Springs, and there’s no admission charge to enter the area, so it offers a nice break if you want to take a day off from the theme parks but still spend some time immersed in holiday magic at Walt Disney World.