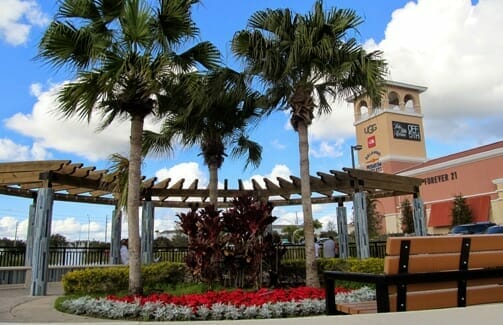 Orlando is commonly thought to be expensive. Souvenirs, food and drink and even admission tickets to both the major theme parks and the smaller attractions can be quite pricey. For those on a budget, just trying to fit all of the sightseeing in can seem daunting. The natural assumption could be that Orlando is an overpriced place to shop.

In reality, this is not the case. For those “in the know,” Orlando is home to a stunning variety of low priced, high quality goods. While deals can be found all over town, for a sure bet one stop collection of great bargains, be sure to check out Orlando’s outlet malls.

The transformation into Prime Outlets brought in a fresh energy and breathed new life into the aging outlet center. Prime Outlets’ focus was on high end outlet stores from Burlington to Van Huesen to London Fog. During the changeover, much renovation was also done to the original buildings, particularly in the area of landscaping.

Prime Outlets turned out to be exactly what the old property needed. A new focus and vision helped propel Prime Outlets into Belz Factory Outlet’s old position as a must-visit shopping destination. However, times continue to change and outlet malls, like anything else, must continue to evolve in order to stay competitive.

To this end, Prime Outlets has recently undergone yet another major facelift. In addition to major remodeling work to update the design elements, Prime Outlets has upgraded its list of tenants. New stores will include Neiman Marcus, Michael Kors and Escada. Orlando has become a true high end shopping destination, and Prime Outlets has risen to the challenge of meeting the demands of truly discriminating clientele. The upgrades will open in phases, with Phase One premiering in July 2007. The Neiman Marcus Last Call Clearance Center will be part of this Phase, which is located in the Mall 2 building.

A portion of the original Belz Factory Outlet was acquired by General Growth Properties in the late 1990s. This area has become the Festival Bay Mall, which opened in phases from 1999 to 2002. Festival Bay is also an outlet mall, anchored by stores as diverse as Ron Jon Surf Shop and Vans Skatepark. Festival Bay is laid out in an unusual spokes and wheel design and the property is home to several manmade lakes. The unusual design elements give Festival Bay a modern entertainment feel, which is appropriate since many of Festival Bay’s tenants focus on entertainment. Festival Bay is home to not only a 20 screen movie theater but also a glow in the dark miniature golf course.

Festival Bay got a slow start. According to writeups on deadmalls.com in 2005 and 2006, Festival Bay was fairly written off in the early days. Not much vehicular traffic was observed going into the mall and even less pedestrian traffic was witnessed inside. However, Festival Bay has fought back against its early problems. While not extremely crowded, the Festival Bay of today is a functioning mall with a very unique design. Festival Bay is definitely worth a visit.

Those seeking designer labels at outlet prices may wish to consider Orlando Premium Outlets. This outlet mall is upscale in every sense of the word, from the impressive roster of stores including Ann Taylor, Giorgio Armani and Tommy Hilfiger to the beautiful and open layout.

The Premium Outlets are laid out in and around a courtyard filled with fountains and trees. Each shop has its own entrance from the courtyard, giving the Premium Outlets the feel of an upscale straw market rather than a traditional outlet mall. Food vendors as well as restaurants are widely available, particularly during the summer months.

In keeping with its upscale image, the Premium Outlets offer quite a few amenities not offered at most outlet malls. It is possible to join a VIP shopping club which offers up to the minute notification of sales and other special deals. Group tours with special discounts are available to groups of fifteen people or more. Shopping tour packages and even Stay and Shop partnerships with local hotels are offered as well.

To learn more about the Orlando Premium Outlets, including the tours and special packages, visit the website at premiumoutlets.com. A FAQ and full directory of stores can be found on the website, as can information about upcoming sales and special events.

Orlando has recently entered the high end shopping market. Orlando consumers have become discriminating and fashion conscious and the outlet market has evolved to reflect this changing taste. While Orlando has earned its reputation as an expensive vacation destination, there are still deals to be found around every corner if one simply knows where to look.

Orlando’s outlet malls have changed over the years and now represent the best of 21st century form and function. Small tourist attractions unto themselves, Orlando’s outlets can be found in the busy tourist areas, allowing both locals and travelers easy access. If shopping is in your vacation plans at all then spend some time exploring Orlando’s outlet malls for amazing deals on high quality merchandise.