Orlando is a tourist’s paradise, with numerous theme parks, beaches within driving distance, and tons of entertainment options. In fact, there’s so much to do that it can be intimidating for those visiting for the first time. We have some simple tips that will help ground you so you can begin to plan your trip. 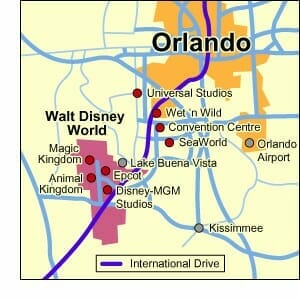 Getting to Know the Major Theme Parks

As you plan your accommodations you’ll likely want to be sure you’re close to the theme parks. The good news is that they’re all located within a 15-mile radius. The Disney parks are located in Lake Buena Vista, which is 20 miles southwest of downtown Orlando. The other major ones, Universal and SeaWorld, are within the International Drive resort area, which is around 13 miles northwest of Lake Buena Vista and 10 miles southwest of downtown.

You can pay for most things ahead of time

One way that new folks are able to budget for their trip is by paying for their major expenses upfront. You can buy discount theme park tickets that could save you a significant amount of money, you can prepay for your Orlando vacation home or resort, and you can buy tickets to many of the dinner shows in Orlando.

Many special events and popular attractions fill up

If you’re the type of family who likes to just show up and go with the flow, Disney World may not be the best option for you. For example, some of the most popular Character Meals, which are special buffets and seated lunches and dinners that feature popular characters coming around to meet guests, will be booked the moment reservations go on sale. You can book advanced dining reservations directly through Disney up to 180 days in advance.

Orlando may be best known for our theme park options, but we’re also close to several beaches. Within an hour and a half, you can get to the east coach beaches that include Cocoa Beach, Daytona Beach, or Canaveral National Seashore. West coach beaches are about two hours away and include Clearwater, St. Petersburg, and Tarpon Springs.

If you’re traveling during the warmer months of the year, waterparks can be a great option to cool off and take a break from the hustle and bustle of the theme parks. You have tons of options, including Disney’s two waterparks, Typhoon Lagoon and Blizzard Beach, SeaWorld’s waterpark, and Wet ‘n Wild. Even if you’re traveling during the cooler months, these parks are open year-round and the water is heated. Just be sure you check the hours as they can be quite limited during the winter.