There’s an old joke that one of the most common questions asked of Disney Cast Members is, “What time is the 3 o’clock parade?” Actually, it’s pretty easy to get confused about parade times, since the Magic Kingdom alone has two different daily parades. Add in parades at the other parks, like Disney’s Animal Kingdom, and you’ll see where the confusion comes in.

Which of the daily Walt Disney World parades are the most fun? Here are details on the ones you shouldn’t miss: 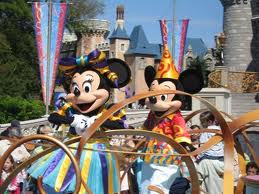 Mickey and Minnie are at most Disney World parades

The elaborate lighted floats and delightful music are what make this parade a must-do when you visit Walt Disney World. See floats like a giant version of Elliott, Pete’s dragon, blowing smoke from his nostrils as he glides along the parade route, and wave to Tinkerbell as she brings the lights to life with her magic. There are also street performers and mini floats that delight everyone along the parade route. The 20 minute parade boasts half a million colorful lights.

Due to its popularity, the Main Street Electrical Parade draws big crowds. Be prepared to stake out and defend your viewing spot 30 to 60 minutes ahead of time, depending on the season.

For little kids, the characters are always the biggest draw, and Mickey is joined by friends like Minnie, Goofy, and Donald. Family members of all ages, including the adults, will be fascinated by the eight-foot-tall Party Animals that tower over the crowd as they make their way down the parade route.

This parade is worth catching because it has a little bit of everything, like floats, characters, puppetry, and street performers. It normally kicks off at 3:45 p.m., but check the show schedule in your park map in case the time has changed.

The Electrical Water Pageant: The Electrical Water Pageant is actually one of those neat little “secrets” at Walt Disney World that many people don’t even know about. This nightly parade holds several performances on the Seven Seas Lagoon outside of the Magic Kingdom. It’s a classic that has been around since 1971, although it has changed some over the years. According to the Disney Parks Blog, it was actually the inspiration for the Main Street Electrical Parade.

The barges on the water perform to music as they take on the form of various sea creatures, like whales, turtles, sea horses, and even a sea serpent. Then they switch over to a patriotic finale.

Although times can vary, the parade usually makes a stop in front of the Magic Kingdom entrance area at around 10:25 p.m. when the park is open until 10 p.m. or later.

You can also view this parade each night from any of the Disney resorts that ring the lagoon. Take the monorail to the Grand Floridian, Polynesian, or Contemporary and walk out to the beach. The times are usually 9 p.m. for the Polynesian, 9:15 for the Floridian, and 10:10 p.m. at the Contemporary. It’s also visible from the shore of the Fort Wilderness Campground, where it usually appears at 9:45 p.m.

Check out www.orlandovacation.com or call 1-800-641-4008 to find out the best Walt Disney World deals so your family can enjoy these fun parades.